The Wild Hunt is a well-known folklore story in Northern Europe. It is said that seeing the Wild Hunt is dangerous because it is a warning of a coming disaster or the death of the person who witnessed the ghost riders crossing the skies.

Over the centuries, many authors have written about the tale of the Wild Hunt. There are several versions of this story associated with the spirits of the dead. 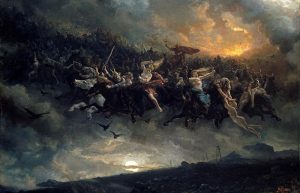 The Tale Of The Wild Hunt In Europe

Depending on the region, in German folklore, the Wild Hunt is known under different names, but the “two most common names, Wild Hunt (wilde Jagd) and Furious Army (wütendes Heer) emphasize several notions: danger, fury, the speed with which the troop moves, and its unruly and ungovernable nature, which can be found in the names forged with wild or wut/mut.” 1

The leader of the ghostly army has been given various identities including Wodan, Knecht Ruprecht, Berchtold (or Berchta), just to mention a few.

The folk myth of a ghostly leader and his group of hunters and hounds is famous in France, especially in Normandy, where the story is referred to as the Familia Hellequini, and Old French Maisnie Hellequin (the ‘household or retinue of Hellequin’). Scholars suggest the Old French name Hellequin borrowed from Middle English Herla King (Old English *Her(e)la-cyning) coming from the Romance-speaking Norman invaders of Britain.

As Claude Lecouteux writes in the interesting book Phantom Armies of the Night: The Wild Hunt and the Ghostly Processions of the Undead, “we owe the first account of the Infernal Hunt¹ to the monk Orderic Vitalis from St.-Evroult Abbey in the Lisieux diocese.

He was born in Attingham, England, around 1075 and died in 1140. Orderic compiled an Ecclesiastical History, the seven chapters of which form a history of Normandy. Among many memorable events, he recounts the following encounter.

“I cannot ignore or remain silent about an event involving a priest of Lisieix diocese on New Year’s Day. The priest was named Walchelin, and he had responsibility for the Church of St. Aubin the Confessors, a former monk who became bishop of Angers. On the night of January 1, 1091, this priest was called out to attend a sick man, as was his duty, in an outlying area of his parish. He was coming back alone, through an isolated part of the country, when he heard the kind of sound that is made by the passage of a great army.

He assumed it was the personal guard of Robert de Bellême, which made a hurried approach to the siege of Courcy. The moon shone brightly under the constellation of the Ram, and the road was clear. Wachelin was a young man, courageous and strongly built and adroit, but when he heard the kind of sound made by a rabble of soldiers, he became fearful. He remained there, uncertain whether to flee and so avoid being attacked and robbed by ruffians or to stand his ground and defend himself. He noticed four medlar trees standing in a group some distance from the path, and he decided to hide in this little grove until the mounted horsemen had passed, but a figure of enormous size, wielding a large club, stood in his way, and holding the weapon over his head, the man cried, “Stay where you are. Do not move.””

The tale goes on: “The priest immediately stood still and supported himself on his staff. The grave figure who carried the club took up a position beside him, without doing him any ill, and together they waited for the army to pass.”

Due to the role of the leader Odin, the Wild Hunt, also known as Åsgårdsreien has deep roots in Scandinavian and Norse culture. In the Norse pantheon, Odin, the king of the Gods, is considered as ‘Allfather’ and ruler of Asgard. Even after Scandinavia became Christian, the belief in Odin and other Norse gods prevailed for a while. It was not uncommon to be Christian and yet carry Norse symbols. As previously written on AncientPages.com, Christian Viking King Harald Bluetooth did carry an amulet made in the shape of Mjölnir, known as the Hammer of Thor.

“After a transitional period during which paganism and the Christian faith were commingled, they were preserved linguistically in place-names and in frozen expressions and metaphors. This is how “Odin” and “troll” later became synonyms for the devil. Some figures were transformed and incorporated into folk legends—the troll became a dwarf in Scandinavia and in the Shetland islands, where it is called trow—but an examination of charms and spells reveals their persistent survival.

The former minor lunar goddess Bil can be seen in the Bilwiz, a figure in medieval folk beliefs.

During the eighteenth century Odin became the leader of the Wild Hunt, as the scholar Johann Peter Schmidt, writing in 1742, informs us. 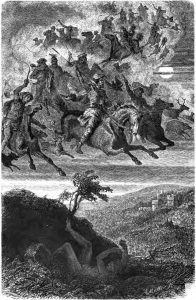 It is said in particular that this younger Odin was an archmagician and had no peer in the arts of making war. This is why some people have sought to see his name Woden as a derivative of “to rage” (wüten).

Further, no one is unaware of the senseless belief held by countless folk, especially some hunters, that the time around Christmas and on the eve of Carnival (Fastel-Abend) is when the one called Woor or Goor or the Wild Huntsman passes. They say the Devil organizes a hunt with a troop of rapping spirits. If we get to the bottom of this superstition, we see that it emerged from the story of this younger Odin, and that the common man thinks that Odin or Wodan passes.

This is why a company of ghosts like this is called the Furious Army, Wodan’s Army, Gooden’s Army, or the Army of Odin.” 2/sup>

No matter what country, the sight of the Wild Hunt has always been considered a bad omen. People believed those who witnessed the ghost raiders would be the victims of a disaster of some kind or perhaps even die themselves. According to some folklore beliefs, those who catch a glimpse of the Wild Hunt can vanish forever. Such unfortunate people can be abducted to the underworld or the kingdom of the fairies. Some suggest the spirits may drag a sleeping person to join the Wild Hunt, and if this happens, the individual will never return to the living.