The story of Henry Ziegland has been around for over 100 years and is one of the unluckiest, and most unbelievable, tales you will hear.

In 1905, the farmer, from Honey Grove, Texas , dumped his then girlfriend, Maysie Tichnor, who took the news incredibly badly and killed herself.

Angered by the way Henry had treated his sister, Maysie’s brother took it upon himself to exact some revenge.

He went down to Henry’s home and shot him before turning the gun on himself and taking his own life.

However, unbeknownst to the vengeful brother at the time, his first shot only grazed Henry, and instead landed in a tree behind him.

So far, it’s a pretty tragic series of events, I think we can all agree. 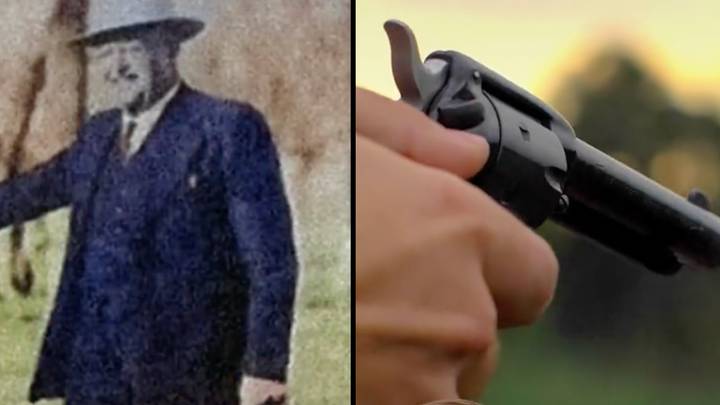 Henry was grazed by the shot fired by his ex-girlfriend’s brother. Credit: Jozef Polc/Alamy

Well, fast forward 20 years and Henry is out chopping some trees down on his land, but there’s one he just can’t budge because it’s so big.

So instead of trying to axe it down as he usually would, he bored some holes in its trunk and packed it full of dynamite.

Now, while upon detonation the tree was blown to pieces, as planned, it also dislodged that bullet that had been sat there waiting for over two decades.

The explosion sent said bullet hurtling through the air, striking Henry in his temple and sadly killing him.

Unsurprisingly, the story made the local news, with the whole sorry affair printed in black and white.

It has since been published around the world, with news outlets in all four corners of the globe informing their readers of the unfortunate tale.

But just how true is it?

Well, no one has ever actually come forward to corroborate it, but neither has anyone proven it to be false.

However, there are a couple of holes, which need to be addressed.

The first is that the story was actually republished 12 years after it was said to have happened, in 1913.

Now, of course, stories are retold every now and again, I mean, this is a prime example, but it was published as if it had happened the day before, even using the same names as the original story.

One slight difference was that this time it was said to have taken place in a different part of the state, Fort Worth.

People are split on whether they think it was a hoax made up by some kids who contacted the local newspaper or that it did really happen.

Maybe we’ll never know, but one thing is for sure, it’s bloody sad.

USS Gerald R Ford Class (CVN-78) And Queen Elizabeth Class UK. Which is bigger?
Ukraine receives modern self-propelled howitzers from France
Iranian Navy revealed its new advanced warship
The moon is about to become the new habitation of mankind since it has enough oxygen for 100,000 years to sustain 8 billion people

SCAN THIS QR CODE WITH YOUR PHONE