Alfred the Great was the first king of the Anglo-Saxons and one of only two English rulers to have been given the epithet ‘the Great’. He may have earned this title in part by defending his kingdom against the Vikings and for his efforts in improving education.

Alfred is often remembered as one of England’s greatest Anglo-Saxon rulers. The only other English ruler to receive the accolade as ‘the Great’ was Cnut the Great , so Alfred must have done something quite special to receive the honor. In fact, it was thanks to Alfred that England was not completely conquered by the Vikings. Additionally, Alfred encouraged learning and literacy, and the ‘Anglo-Saxon Chronicles ’, an important source of information for the history of Anglo-Saxon England, began during his reign. 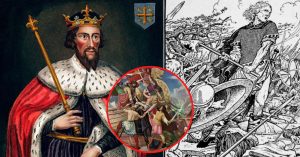 When was Alfred the Great Born?

Alfred the Great was born on April 23, 849 AD in Wantage, Berkshire. He was the fifth son of Aethelwulf the king of Wessex , one of the seven petty kingdoms of Anglo-Saxon England . As Alfred had five older brothers, it seemed unlikely that he would inherit his father’s throne. Alfred himself seemed to have been more interested in scholarly pursuits than taking the throne. For instance, as a young boy, Alfred visited Rome – which may have awakened his interest in Latin learning. Some say he even met the Pope . Additionally, his mother aroused his interest in English poetry at an early age.

Alfred’s Father’s Death and the Order of Succession

Aethelwulf died in 858 AD and was succeeded by his second son Aethelbald. His oldest son, Aethelstan, had perished before him. At that time, England was under constant attack from the Vikings of Denmark. In order to ensure the stability of the kingdom after his death, Aethelwulf had the succession of the kingship arranged in such a way that the throne would be passed from older to younger brother, rather than from father to son. Therefore, when Aethelwulf’s fourth son, Aethelred died in 871 AD, Alfred succeeded him, even though the former had two infant sons.

What was Alfred’s Priority as King?

The most important matter that Alfred had to deal with as king of Wessex was the problem of the Vikings . Alfred was defeated at Wilton shortly after succeeding his brother and was forced to make peace. It is likely that the king paid tribute to the Vikings , who then left Wessex in peace for the next couple of years. The Vikings then launched a campaign against the Kingdom of Mercia, which lasted until 874 AD.

A map of the route taken by the Viking Great Heathen Army which arrived in England from Denmark, Norway, and southern Sweden in 865 AD. (Hel-hama / CC BY-SA 3.0 )

In 876 AD the Vikings turned their attention to the Kingdom of Wessex once more. In January 878 AD, Chippenham in Wiltshire was seized by the Vikings. This was a devastating blow to Alfred, as the Vikings had a secure base from which they could launch further attacks on Wessex. The king, however, managed to escape and resorted to guerrilla tactics in his war against the invaders.

In May 878 AD the Vikings were defeated at the Battle of Edington and Alfred pressed his advantage by pursuing the Vikings to Chippenham. Following a siege of 14 days, the Vikings surrendered. Alfred realized, however, that it would be impossible to expel the rest of the Vikings form England by force and therefore he created a peace treaty with the defeated Vikings. Under the treaty, their king Guthrum converted to Christianity with Alfred as his godfather and many of the Vikings returned to East Anglia to settle as farmers.

The Saxon king Alfred the Great penetrates the Danish camp disguised as a wandering minstrel, in order to get intelligence. (John Haare / Public Domain )

A Period of Peace Results in a Divided England

Wessex was left in peace until 885 AD when Kent was invaded by the Vikings from Denmark, aided by those who settled in East Anglia. Alfred defeated this army and a partition treaty was negotiated. This treaty effectively divided England between Alfred and the Danes. The latter controlled northern and eastern England, an area that became known as the ‘ Danelaw’. As Alfred had captured London in the same year, the rest of England that was not under Danish rule came to acknowledge him as king. It was also at this time that Alfred adopted the title ‘King of the Anglo-Saxons’.

Nevertheless, the Danish Vikings continued to attack Alfred, though with little success and they finally gave up in 896 AD. One of the reasons for the failure of the Vikings is that Alfred was much more prepared for them than he had been when he first came to power. In addition to building well-defended settlements in his kingdom, Alfred also reorganized his army and maintained good diplomatic relations with both the Mercians and Welsh.

What were Alfred’s Other Outstanding Qualities?

Apart from successfully defending England against the Vikings, Alfred was a competent administrator and is well-remembered for his attitude towards learning. For instance, he invited scholars not only from England but also from Continental Europe to his court. Additionally, he had important Latin books translated into English, including Saint Gregory I’s ‘ Pastoral Care’ and Saint Augustine of Hippo’s ‘ Soliloquies’, so that his countrymen could read and benefit from these works. Moreover, all young freemen of adequate means were required to learn to read English.

The Boyhood of Alfred the Great, his love for learning and literacy was one of his outstanding qualities. ( Kirklees Museums / Public Domain )

In 893, the king was praised in Asser’s ‘Life of Alfred’ with the following statement, “He was superior to all his brothers .. both in wisdom and in all good habits, and furthermore because he was warlike beyond measure and victorious in almost all battles.”

With the revival of intellectual activity in England during Alfred’s rule, it is little wonder that the Anglo-Saxon Chronicles began to be written towards the end of his reign. This piece of work is the most important written resource for the Anglo-Saxon period in England. The chronicles continue well into the Norman period and nine interrelated manuscripts have survived in whole or part. The historical importance of each manuscript varies and the original is not known to have survived.

Alfred the Great died on October26, 899 AD and was succeeded by his son Edward the Elder. He was buried in his capital city, Winchester.

But Was Alfred the Great Really that Great?

In 2017, the ‘greatness’ of King Alfred came into question. And as Stuart Brooks writes, the results of the investigations suggest that “It looks like Alfred was a good propagandist rather than a visionary military leader.”

Although he is said to have rallied the English army in 878 to defeat the Vikings at Edington, some of the other acts Alfred’s been credited with were apparently continuations more than innovative ideas created by the king. For example, archaeological evidence suggests that many of the Burghal Hidage strongholds which Alfred used were former Roman towns or Iron Age hill forts just refurbished for use by the Anglo-Saxon military. It also seems that the military strategies he used were already known in 8th century Mercia.

The “Alfredian” style of urban planning seems to be mis-credited too, with some factors being set in motion before his rule and others, such as “his” street planning, didn’t happen until about 100 years after he had died. The ‘purpose-built’ towns only took off during his successors’ times. It appears that Alfred the Great has been wrongly credited as the creator of “ fortress Wessex .”

Statue of Alfred the Great at Winchester unveiled during the millennial commemoration in 1899 of Alfred’s death. (Odejea / CC BY-SA 3.0 )