Skip to content
Home Myth A Slavic Legend of Immortality: Koschei, the Deathless 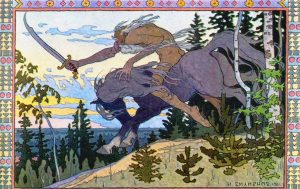 A figure from Slavic folklore , Koschei the Deathless (aka Koschei the Immortal) was known for his titular characteristic: his inability to die. What is most interesting about this figure, however, is that his immortality was not foolproof. It was said that when Koschei cast the magical spell to protect and defend himself, he accidentally left room for error.

Though there are few records about his physical appearance, in legend Koschei is most often described as ugly. It is also said that the immortal being enjoyed riding naked upon his enchanted horse through the mountains of Russia.

Koschei the Immortal was also known as a shape-shifter, sometimes seen as either a monster or a human, but he preferred to kidnap his female victims in the form of a whirlwind tornado. The most important aspect of the mythical Koschei’s being, however, was his absolute terror of death. This fear left him open to making mistakes, and his most fatal mistake was the imperfect spell he cast to protect himself from harm.

How Did Koschei Become Immortal?

Koschei maintained his life and immortality through the removal of his soul. Taking it from his body, it was said he hid it in a needle, inside an egg, in a duck, in a rabbit, then locked it in an iron or crystal chest, and buried it under a green oak on an island.

Koschei the Deathless further safeguarded his soul by ensuring his animal vessels, or seals, could get away. Legend has it that if the chest was found, dug up, and opened, the duck would try to flee. If the duck was killed, the rabbit would try to run.

It is only once his opponent reached the egg that Koschei’s life was truly endangered. The egg contained the needle which held the heart of his power. According to myth, possession of the egg was enough to gain control of the demon.

Furthermore, should the egg break, the needle within it would break as well, forcing hundreds of years of age down upon Koschei in a single instant, vanquishing the demon once and for all with the power of age.

The Legend of Koschei and Prince Ivan

Interestingly, the most prominent tale of Koschei the Deathless has nothing to do with the egg that is the source of his immortality and strength. Instead, it is about his womanizing ways. Andrew Lang’s ‘ The Red Fairy Book’ and Alexander Afanasyev’s ‘ Russian Fairy Tales’ both tell the story of Koschei the Deathless, in which the life and love of Prince Ivan Tsarevitch is the focal point instead.

Following the death of his parents, Ivan saw his three sisters wed to the first suitors who came across them—wizards in the form of birds. Within a year, however, Ivan became lonely without them and ventured off on his own to locate them.

He found the warrior woman Marya Morevna, and wed her along the way. Soon after, Marya chose to go to war and left Ivan in charge of the house, warning him not to set foot in a certain closet, for there was a secret she had long kept locked away there.

But humans are a curious race – when Marya left, Ivan disobeyed her request and ventured into the closet where he then met a decrepit old man locked in place with 12 chains. The old man begged Ivan for water, having been deprived food and drink for an extended period of time, and—feeling empathetic for him—Ivan provided the man with a dozen barrels of water. Almost immediately, the man was fully revived and restored, the old shell withering away to reveal the young, strong, powerful, and immortal sorcerer, Koschei.

Empowered, Koschei broke free of the chains he had been bound by, declared he would kidnap his prisoner guard Marya, and vanished into thin air, his magic as fully restored as his body. At once, Ivan embarked on a mission to rescue Marya, finding her and fleeing with her twice – only to be overcome both times by Koschei on his much faster steed.

The prince captured Koschei, but this resulted in Ivan’s death – he was diced up and thrown in a barrel into the ocean. However, Ivan cheated death, as his three beloved sisters each had married the aforementioned wizards, who located and revived the prince.

Ivan was then instructed to retrieve a magic horse, one that could travel as fast, if not faster than Koschei, which he learned from his wife could be obtained from Baba Yaga , an old sorceress. He passed Baba Yaga’s tests by remaining alive and successfully completing the tasks she gave him over the course of three days. He then stole a horse and fled to Marya again.

It is here where discrepancies in the mythical story appear. Koschei “the Immortal” was not killed with the use of his egg according to Andrew Lang’s text; thereby implying that since Ivan did not come by it, it must have been previously destroyed.

In Lang’s and Afanasyev’s versions, Koschei chased Ivan and Marya down unsuccessfully and was slain by either Ivan’s sword or a sharp kick to the head by Ivan’s steed, and the sorcerer’s body was properly burned.

Regardless of the version of the story, Koschei, who had tried so hard to be immortal, was indeed considered dead by the end of every telling of the tale. Ivan and Marya Morevna lived “happily ever after” and Ivan’s relationship with his sisters restored.