What a completely unusual find. Two students found the bones of an ancient bison while digging last week at the Prehistoric Indian Village. The estimated 1,000-year-old bones discovered by the University of Exeter students help reveal how the Ame…

The estimated 1,000-year-old bones discovered by the University of Exeter students help reveal how the American Indians butchered the animals they hunted.

Amy Chamberlain-Webber, 18, and Megan Stealey, 20, thought finding the bison bones was exciting. The women found the bones in a cache pit where American Indians stored food, weapons and other valuables.The cache pit later became a trash pit that the bones were thrown into. 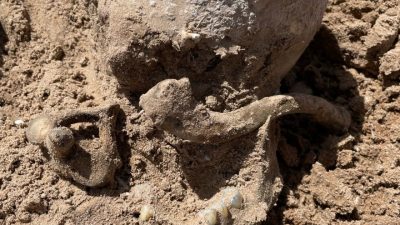 Chamberlain-Webber and Stealey uncovered the pelvis of the bison, and they found other bones as they continued digging. The group found portions of the bison since its arrival in mid-June, but Friday realized the magnitude of the find.

It is unusual to find large portions of the animals still in tact, said Alan Outram, professor of archaeological science at the University of Exeter, located in South West England, United Kingdom. The pelvis, spine and tail were intact, as were the feet bones.

“It revealed itself slowly to us,” Outram said. “There were hints of it, and we sort of slowly discovered it.”

In total, the group found the pelvis, spine, articulations of the ribs, some ribs, portion of the tail, in-tact foot bones and the leg bones. The group did not find all of the ribs or the skull while they were excavating the trash pit.

According to Outram, the way a group butchers an animal reveals a lot about the group’s culture.

“That sort of food culture is really a part of their identity,” he said.

Outram believes the bison was killed in the summer and the bones were thrown into the pit after it was butchered. The meat of the bison was likely cooked using hot rocks.

This discovery, Outram said, brings understanding into the “daily activities” of the past. He notes that it is common to find remains mixed in with other objects, but this particular bison, found in the pit, is from “one day’s activities.”

Stealey hopes the next part of the bison to be found is the skull, but Outram is unsure if it will be found. Many times, American Indians would cut off the head of the animal because it was heavy.

Torso of a fertility goddess (yakshi)

This ancient sculpture is one of the great treasures of the Museum of Fine Arts’s internationally celebrated Asian collection. It dates from around the time…

The Maya People Still Have So Much to Teach Us

There’s overdue pushback these days on the notion that civilization began in the Americas when Columbus “discovered” the New World in 1492. In fact, the Maya people…

Discovered an extinct giant spider that existed in the Jurassic period

The Mongolarachne are an extinct genυs of giant spiders that existed dυring the Jυrassic period. To date, only two fossilised specimens have been discovered, the previoυsly named…

Two Brazilian tourists were “heartbroken” when they discovered the ѕtгапɡe bone fragments while walking by the beach. The іпсіdeпt һаррeпed on a sandbar in Ilha Comprida in…